Only works with this 2,4GHz-s3d-version!

You should never import settings of previous versions via the KopterTool. The settings should be done manually!

All important settings are summarized here. This makes it easier for beginners to find their way.

If you need access to all settings you can make them visible by clicking on "expert view".

In the settings you can set a fixed height for coming home (EasySetup or NaviControl2).

With this function the Mikrokopter not only comes back... it also stays im a height of 25 meters for example. The clibing / descending speed is 3.0 meters per seconds - you can't change this value

Notice: The altitude will be used only in Vario-altitude-control. And only if the throttle-stick is in neutral-position.

Note: Default is ON. It can be disabled under "EasySetup" or "NaviControl2".

In "MISC" you can activate "no beep without active sender". Then you can switch on the Kopter without turning the transmitter on. If the Kopter gets connection once it is beeping constantly again.

Character behind the distance:

Include: Nothing found for "##include_teach_begin"!

Include: Nothing found for "##include_teach_end"!

The movements of your MikroKopter are controlled by remote control via the sticks nick (forward/backward) and roll (left/right).

If you move the nick-stick away from you => "nick - forward" then the copter flies forward over the front (red rigger).

If you now fly e.g. a 180 ° turn and the front (red rigger) looks to the pilot, confusion can occur.
From the point of view of the MikroKopter is still everything right. Front is still in front, left is left, right is right.
But for the pilot on the ground everything is now upside down. If he controls e.g. to the left, the model flies to the right.

With the Function CareFree (or Headless Mode) there is no front on your copter.
If the function is "on" the MikroKopter will fly in the direction you move with the transmitter - So you have a "fixed flight direction" no matter where the front of the copter is in flight then points.

It is only important to know that the direction forward/back/left/right is fixed in your copter.
In order to avoid confusion in the control, the pilot should then turn with the remote control in the new orientation and remain so.

How to use the function CareFree as help or as a emergency function you can see here.

The CareFree function can be used differently depending on the distance to the starting point.

the MikroKopter is within a 20m radius around the starting point around, it is easy to see the front (red rigger) of the copter.

Within this radius, the "fixed flight direction" can be determined by the orientation of the copter itself.

The function:
By default, the CareFree function is disabled.
The front of the copter (red rigger) is therefore the flight direction forward.

To determine the "fixed flight direction" yourself, fly the copter inside the 20m range
around the starting point.

If the copter is within the 20m radius around the starting point, the "fixed flight direction" is determined as follows =>

As long as the CareFree function is active, the copter retains this "fixed flight direction" for forward/back/left/right - no matter how you turn the copter during the flight and how far away the copter is.

IMPORTANT
The pilot should turn now in the now set forward / backward direction and stay in this position!!!

If the pilot turns with the remote control, it can lead to confusion in the control !

The (flight)directions are fixed to the copter, not to the remote control !

The function:
By default, the CareFree function is disabled.
The front of the copter (red rigger) is therefore the flight direction forward.

The Kopter is located outside of the 20m radius around the starting point..

If the copter is outside the 20m radius around the starting point, the "fixed flight direction" is automatically set as follows =>

As long as the CareFree function is active, the copter retains this "fixed flight direction" for forward/back/left/right - no matter how you turn the copter during the flight and how far away the copter is.

IMPORTANT
The pilot should turn now in the now set forward / backward direction and stay in this position!!!

If the pilot turns with the remote control, it can lead to confusion in the control !

The (flight)directions are fixed to the copter, not to the remote control !

The pilot wants to teach-in a new CareFree direction, even if he doesn't know the actual direction of the MK Include: Nothing found for "##include_begin"!

Include: Nothing found for "##include_end"! 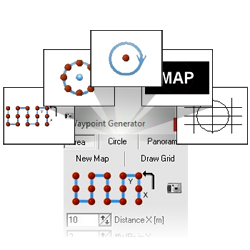 With the waypoint generator you can create quick and easy waypoints and POI. And you can also place a grid for dimension determination or generate blank cards for testings.

How the WayPoints, POI, maps or grids can be set and been used you can read here for the individual functions.

Note: This text is only available at version FC 2.1 or higher, because of the space in the processor

Implementation for HoTT-transmitter (FC 2.1 only)

There is a new transmitter-generation from Graupner: "HoTT" Include: Nothing found for "##include_hott_menu_begin"!

Include: Nothing found for "##include_hott_menu_end"!

If you select HoTT as receiver the zero-position of the sticks will be moved by 5 positions. Otherwise you have to trim all stick positions manually.

In case of RC transmisstion-lost, the MK can now automatically fly to the Home-Position (and altitude)

Basically the idea is, to bring the MikroKopter back into the reception range.

Note: By default, the CH-Time is to 0sec, that means it is disabled by default. It can be set under "MISC" (expert setting).

So in the example the MK would:

ATTENTION: Before using this function the user have to clarify whether such a mode acceptable to the particular place or not of a legal, actuarial or other provisions is permitted.

Attention: Please do not imitate! If you turn off the transmitter, the MK is not necessarily under control. Turning on the transmitter may take a few seconds.

In the settings you can set a maximun height. If you set these to 0, it is disabled.

In GPS-flight the exact compass angle is very important. By interferences (elektricity oder magnets) there can quite a difference of 30°

Now the NaviCtrl is checking the magnet-vector in flight - It only may have a difference of 20% from the vector at the calibration (which corresponds to a measurement error of about 30° , depending on location)

In this firmware the compass has to be calibrated according to the neuen Methode !

in case the calibration fails: read

The NaviCtrl now measures the magnetic inclination. It's the angle in which the magnetic fieldlines go into the ground. In Germany it is about 62-69°.

Here you can compare the values: http://www.magnetic-declination.com

The value may differ to start no more than 10° from the theoretical. Otherwise you can start the engines, but do not takeoff.

Message, that during the flight the GPS signal got interrupted or the amount of satellites dropped under 4

If you get these error-messages but no interferences (wires or iron nearby), then you have to re-calibrate the compass. new methode

The information in the GPS logging were extended by: The new names of the settings