The compass is already integrated into the NC v2.0 - so the MK3Mag is not needed there.

This is a 3-axis magnetic field sensor. Using the current attitude data it forms a tilt compensated compass. The MK3Mag can be used on its own, together with the Flight Ctrl to stabilise yaw control or in combination with the NaviCtrl. The MK3Mag is supported by the FlightCtrl from software version 0.69K upwards.

For use of the MK3Mag it is essential that the distance between compass and Buzzer minimum 10cm. It is best to mount the buzzer on the outer end of one of the frame arms.

The highest Interfering Magnetic field is generated by: Buzzer, Motors, Power Cables and Metal Parts (in approx. this order).

If problems with the MK3Mag are only noticable at higher throttle, it is likely that the interfering magnetic field is generated by power lines. Ideally the individual DC-lines should have very few bends and Plus/Minus should be routed parallel as their magnetic fields are then compensated by each other (Tips and Video).

Usually the MK3Mag is used on a NaviControl. In case you don't want the GPS-features, you can connect the Mk3Mag directly onto the FC.

Attach (solder) the 10 pole pin row onto the SIDE of the MK3Mag and connect to the FlightCtrl using a 1:1 Ribbon Cable. To see the FC and Compass together on the Kopter tool, press a Pin Header (Reichelt Electronics: PFL10SK) onto the cable.

Special attention should be taken to ensure that the MK3Mag is Level (i.e.: parallel towards the FC). An angle of 5° for example would have the effect of an error of >5°.

To connect the MK3Mag to the NaviControl, a 10-pin connector must be installed:

Installation: Use two plastic screws to fasten the MK3mag and avoid contact loss. In case of a bad contact, the GPS navigation could stop or the MikroKopter could fly into the wrong direction. Never use screws made of material that can become magnetic. When this screw becomes magnetic due to the engines, the compas function will get an offset, you will see this as a rotating Mikrokopter, directly after lift-off.

In case that the pins must be replaced: Trim the Yaw of the RC-Transmitter to Zero

Attention: Yaw must be zero in case of using the compass.

You can check these values in the Koptertool

Note: if you use the MK3Mag directly on the FC, it will not make the clicking sound. This calibration method will work nevertheless.

To activate the Compass use the Kopter tool (connected to FC) and under Settings->Configuration place a tick on Kompass (Compass).


The KopterTool can also be used to verify the Calibration. To do this set the scope to display the values: KompassValue, Ersatzkompass and MK3MagCalState and turn the Kopter slowly. The angle change should be displayed proportional to the rotation of the Mikrokopter. 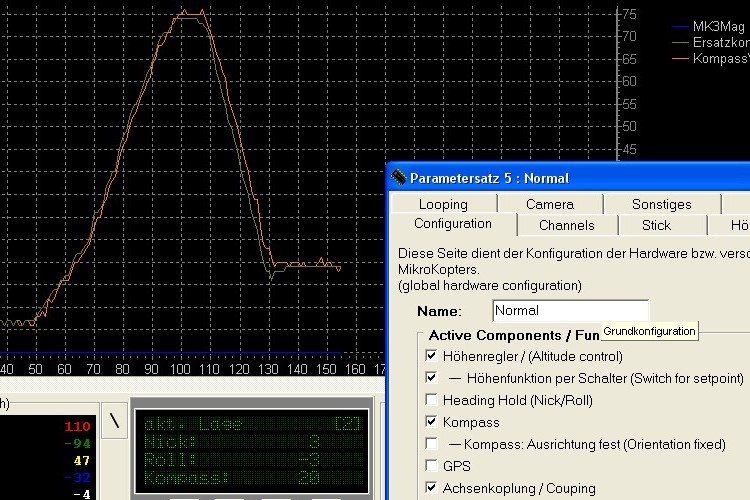 A detailed assemebly instruction (currently in German) can be found here hier.

Italic displayed parts are on the lower side

On preassembled (red) boards, the bootloader is already programmed and doesn't have to be updated.

Attention: if the actual firmware is already V0.23a, please do not perform a further update. There is no update since 02.2010.

In the NaviControl V2.0 you can't switch the communication to the internal compass.

Flashing new firmware through the NaviControl