Information about the pre-populated brushless controlers can be found here: en/BL-Ctrl_V1_1

The Mikrokopter is powered by brushless motors.

A manual for building and using the BL-Ctrl can be found under en/BL-Ctrl_Manual...

The advantages of such motors are :

However, to use such motors the direct current of the batteries has to be converted to an triphasic alternating current) with power output controled so that the speed of the motors can be accurately controled.There are numerous brushless speed controlers available on the market. However very few are available which can fulfill the special requirements: We need brushless controlers which can accept a new throttle value very rapidly (< 0.5ms) and implement it. In addition the controler has to have an I2C bus interface.

The manual for building, the diagram, software, and partslist are all available in the download area [/de_mk/download.php#BL Downloadbereich] (still in German)...

Bare printed circuit boards (PCBs) and PCBs with surface mount devices (SMDs) premounted can be ordered in the Shop.

For programming these speed controlers you will need an ISP adapter such as SerCon. ISP is an abbrevaition for the hardware interface used between microcontroler and programmer.

The control of brushlss motors is tri-phasic in groups of PWM pulses. The PWM frequency determines the hight of the phase-voltage (actually the arithmic mean of the voltage).

The phase voltage on the motor (as group of PWM pulses) determines the rotations per minute (RPMs) of the motor: a motor generates a countercurrent when turning (like a generator). the resultant RMPs will be the balance between current, coutercurrent and power output.

At any time 2 of the 6 FETs are operational to power the motor. The time of commutation (the time at which the 2 FETs must be switched off and the next two switched on to go to the next phase), is determined by voltage measurement (actually comparison) of the unpowered phase of the three motor wires. To do this the different analog comparators of the Atmega8 are used.

Power is measured by the voltage drop over a defined shunt on the PCB.

The poweroutput stage consists of an N-Channel and a P-Channel MosFet for each of the three phases. The P-Channhel Mosfet requires a transistor to be able to switch the gate potential over a controler output pin.

The 10A-MOSFETs from the MK Shop require no special cooling also in closed environment (27°C) under full load. But this depends on a clean and holohedral solder joint: Recognition of the rotor position

This simple part of the circuit allows measuring the position of the rotor in the brushless motor.

From the voltages of each of the motorphases a virtual star is calculated (averaging). The controler compares the filtered voltages of the phasses with the average voltage and uses this to calculate the timepoint for cummutation, which is the point in time at which the FET stage is switched to the next phase.

There is a shunt on the PCB, consisting of a wider copper trail which is lengthened a bit, similar to the layout in this drawing.

The voltagedrop over the shunt allows the controller to calculate the power used, and to reduce power if amperage is excessive. The software does not suddenly cut power, but gradually decreases it. This ensure that the aircraft does not suddenly drops out of the sky if the ESC is close to its maximum power output. The Atmel Atmega8 is used as microcontroler.

It has some important features required for use in such speed controlers: the analog comparators with multiplexers. In addition it has serial interfaces and and an I2C interface integrated into the chip.

The Atmega8 is easy to program, requires limited peripherals and is fast enough for our required RPMs.

After powering up the fully populated and soldered speed controler, and testing that the voltage over "J8" and "GND" is 5V. the LEDs will not be lighting up yet. Only after the ESCs have been programmed will the LEDs become operational and signal the following:

Both LEDs remain OFF: No power to the ESC...

Red and green LED ON: Receiver not connected or not receiving any signal (and therefore no control signals to the ESCs). Is the transmitter ON?

Green LED ON: The ESC is ready for use.

Green LED pulses ON/OFF: The ESC is receiving throttle values but the motor is not connected.

During programming both LEDs on the ESC wil be off. Only after programming has been completed and the ESC has reinitialised will the LEDs operate normally again.

In the BL-Ctrl V0.35 firmware a selftest has been implemented.

Different error states are tested on powering up. If an error is found the red LED will blink.

If the Red LED does not blink, everything should be OK.

In addition the motorwindings will beep during the selftest. It is possible that the propellor might turn a bit as well, although without much power (your fingers won't be cut off, but SAFETY FIRST AT ALL TIMES nonetheless).

After initialisation a series of tones can be heard when the controler testes its endstages.

In case of errors the ESC will also be sending characters to the serial port that indicate which MosFet are at fault. To see these characters the ESC has to be connected to a computer with SerCon (or a similar serial interface adapter). The error codes are:

The following motors have already been used successfully:

All firmware files, documents, and source coude can be find here:Downloads

The connection on the side of the MKUSB must be used. 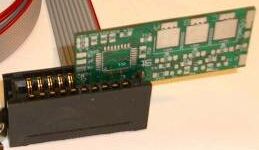 See also: Update in the Koptertool 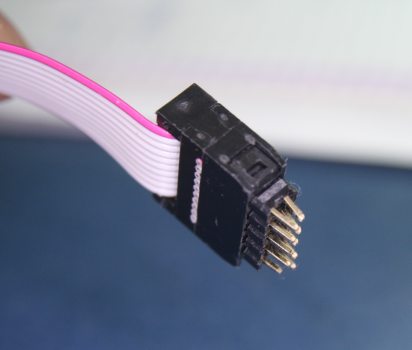 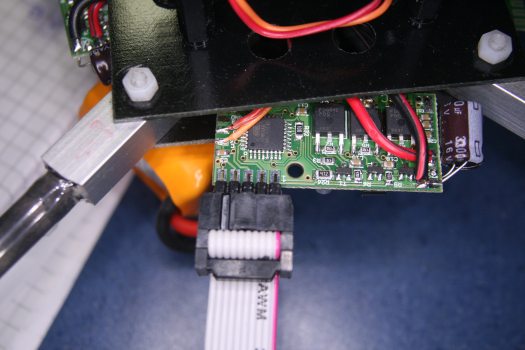 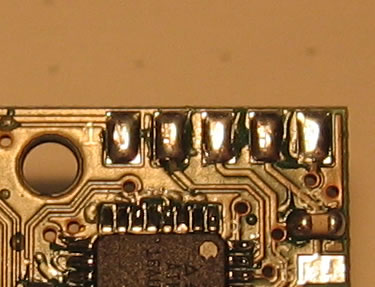