The flight time depends on the following factors:

To estimate the theoretical flight times of the Mikrokopters, there are these possibilities:

how to read the curves

The curves were made with a software too by marc.

They use measured motor/propeller data.

Here we see the curve "Flight time vs. Lipo capacity" of a Quadro XL

If we want to find out, what flight time we can get with a 6600 Lipo, we need to do the following:

The curves are calculated with realistic Lipo-weights. They consider that higher capacity means higher weight.

You can also see on that curve, that the maximum capacity is 14.000mAh. That is the point where the additional Lipos-weights are negative for the flight time.

There are three curves. They depend on the flight style.

Slow hovering results in the longest flight time, because of low losses.

So if we want to find out what flight time we can expect with 500g payload, we have to read the curves as follows:

In this excample the flight time is between 13 and 20 minutes depending on the flight style.

Theoretical calculation of the flight time

If you want to calculate the theoretical value, you can do it that way:

measure the total weight including battery

reading the current from the table

Now we determine the current that the engine needs to hoover (more exactly: Input current of the BL controller) This one uses this characteristic:

Means: Each engine requires 2.5A, to lift his part of the total weight.

The Hexakopter has been used in this example with two 5000mAh-Lipos.

Power consumption and other losses

The above-determined value is an ideal value that specifies the absolute limit.

You'd have to really consider:

For this reasons we estimate ~10% losses

Test of the theory

This we wanted to test pratically. And here is the Video of the test.

The calculation can be done very easily with a tool from Marc:

With the software-tool we calculated the following graphs:

We were able to validate this in practice: 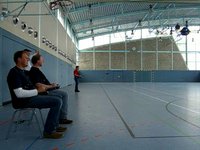 Weights and flight times of the (standard) MikroKopters

Be careful, the speed curve must have been taken with 3S (the curve of 2827-34 does not apply here)