A voltage level can be defined that starts the Autolanding-procedure. If the voltage drops below that level, the MK will descend with the descend rate, that is defined for "Autolanding" A fixed voltage (125 = 12,5V) or a cell-voltage (32 = 3,2V) can be used like in the undervoltage setting.

If the new Brushless controllers V3 are used, this version is needed.

Since this version, the FC recognises the BL V3 and changes the algorithms for attitude control accordingly.

Press "CTRL" on the Keyboard while opening the Settings dialoge of the KopterTool to go into the Settings of the BL V3.

If you use a normal NC without rotation, the value must be 0°

Cameratrigger: waiting time on the Waypoint:

The problem was that the last waypoint on the photos were blurred when the MK already flies to the next point.

Now the NC waits until the flashing pattern was finished.

If the waiting time at waypoint 0, the NC is not waiting

In the past it was not possible to wait a while on the waypoint before the first photo was shot.

New is the "IDLE"-Bit. That sets the Output to OFF or ON between the waypoints.

The GPS-Coordinate is now integrated into the telemetry.

You might need to delete and reload the sensors in the transmitter if you don't see the new parameters.

3.1 - The GPS-Data in the transmitter Logfiles are now compatible to HoTT-Upgrade-Studio (GPS-Pfad path in GoogleMaps) -> now in Degree + Minutes.Decimalminutes 3.2 - Who uses the "DataExplorer" for viewing the data, would need the original "Graupner HoTT2" Filter now. 3.3 - Added extended data into the Transmitter Logfile (see my next post)

NMEA Output on the NC-Interface

Here a Video of this Software-version. 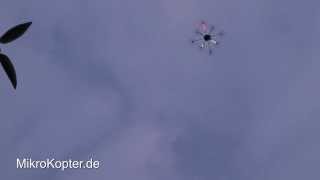 Nick-servo function can be disabled

That is needed if BL-Gimbals are connected and the gimbal should use the camera-nick for POIs.