Around the time of building my MK (early 2K8) i was quite hooked on Conway's Life, hence the acronym... never came around to the actual inverted design since it would have collided with some of the purposes i want to use my MK for. Informal nicknames of my mikrokopter include 'the styro dome' or the 'flying helmet'. Based on the standard MK setup (FlightCtrl 1.0, BL-Ctrl 1.1 with hi-power MOSFETs, NaviCtrl) with some improvements. 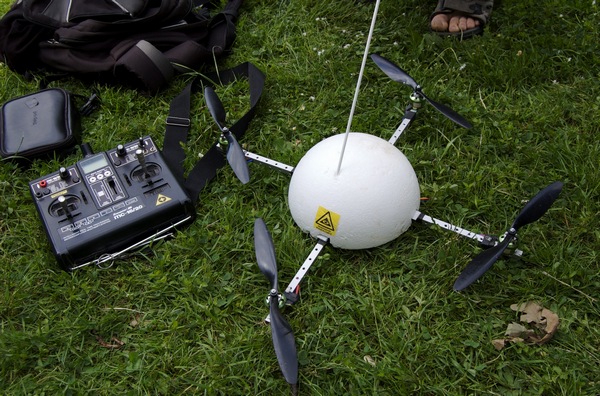 drilled out the alu profiles to save weight and to pull the motor cables through. problem from experience: the more you drill out, the easier the arms get bent when crashing. my 'undrilled' arms have survived many crashes without even a scratch. 3 mm holes seem to be a good compromise, leaves enough stiff material and they can be used to attach all kinds of payload or landing gear to the MK. cut the original thick roxxy cable short and replaced them by thinner silicon cable which are easy to guide through the inside of the arms.

For aerial photography I am using a Canon Powershot SD750 (a.k.a. Ixus 75, 7MP) with the alternative firmware CHDK running. This allows many additional features such as USB remote camera control via J16 / J17, scripting of camera behaviour etc.

Note: I chose this camera because it does not have an optical image stabilizer (OIS) which I have found to render another camera (Samsung NV24HD) quite useless for the MK. got the samsung for the very good 720p video feature but had to learn that an OIS is not made for MK vibrations.

PhilSU's camera mount proved to be quite sturdy and reliable so far.

As a preview video downlink I use the 10 mW Fatshark video transmitter and (so far) a cheap china receiver connected to this little gadget that i shot at ebay for 7€ as a monitor. Not perfect but enough for aiming the camera.